7 Things To Never Put Down A Garbage Disposal 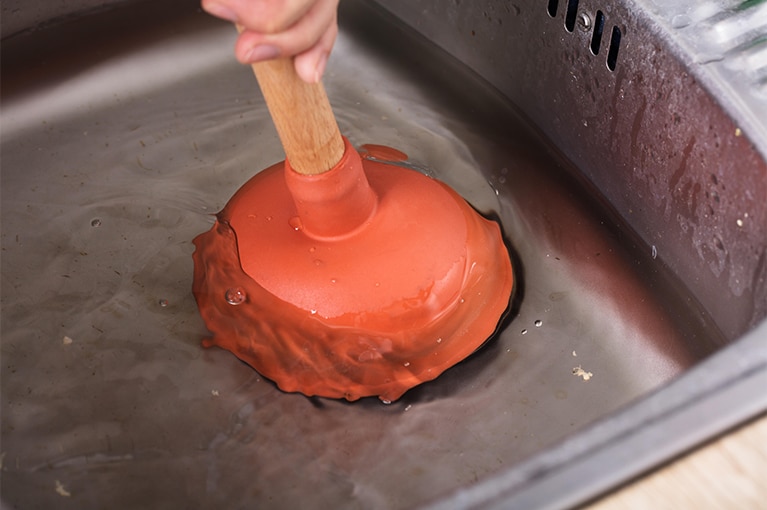 The garbage disposal in your kitchen will devour just about anything, but that doesn’t mean it should. There are some foods that should never make their way into your drain. On that note, non-food items should never be placed in the garbage disposal. Oddities in the disposal will not only spark the need for a garbage disposal repair, but you may also be stuck with a foul-smelling odor if those food remains get stuck in the blades or pipes. To extend the life of your garbage disposal, avoid throwing these things down the drain.

While this one may seem obvious, even small bones can create a clogged garbage disposal issue. Bones that make it past the disposal blades won’t get very far in your pipes, and are sure to create a garbage disposal smell and major blockage.

Celery (or other fibrous veggies)

Fibrous vegetables like celery should never go down the garbage disposal. Just as the strings from celery easily get caught in your teeth, the same thing happens with your garbage disposal. The stringy pieces of celery, pumpkin, or squash get wrapped around the blades, prompting the need for a garbage disposal repair.

Don’t throw the coffee grounds into the garbage disposal after your morning cup of Joe. The thick, black paste that’s formed from used grounds can clog your pipes. Instead of putting them down the drain, use your coffee grounds in your garden. Sprinkle coffee grounds around your plants to keep ants, snails, and slugs away.

Some argue that egg shells can actually benefit the garbage disposal by sharpening the blades, while others say the membrane lining can get wrapped about the shredder, causing it to malfunction. Take the safe route on this heated debate and use the egg shells with your coffee grounds to keep pests out of your garden.

Grease solidifies when it sits in a pan. It will do the same thing to your pipes if you pour it down the drain. Overtime, the grease will build up along the pipe’s walls, blocking the flow of water and waste. Contrary to popular belief, running water while you pour grease down the disposal will not prevent a clog. Pour the leftover grease into a glass or tin container and toss it in the trash once it cools.

Avoid putting nuts in the garbage disposal. The spinning blades will simply churn the nuts into a paste (aka: peanut butter) that will stick to the blades and your plumbing.

The thinnest part of the onion can create issues in your garbage disposal. The thin, slimy film of the vegetable, found just beneath the papery outer layer, is so thin, it can sweep past the disposal blades (similar to that of the egg). It’s easy for the membrane-like film to get caught in the drain and block other wastes from passing through. The rest of the onion is safe for the disposal, but be sure to toss the onion skin in the trash.

Rid your kitchen of the bad garbage disposal smell with baking soda and vinegar. The mixture will neutralize the smell and work as a home remedy for small clogs. If the solution doesn’t clear your kitchen of the smell, contact a plumber in Yonkers, NY to ensure you don’t have a bigger problem with your pipes.